Keynote speaker at the forthcoming National Access to Justice & Pro Bono Conference, to be held in in Adelaide on March 23/24 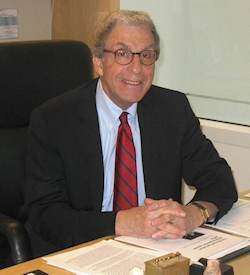 The Keynote Address at the National Access to Justice and Pro Bono Conference (23-24 March) will be delivered by Professor Sheldon Krantz, visiting professor of law at Georgetown University, Washington DC, founder of DLA Piper’s global pro bono entity, New Perimeter, co-founder of the Justice Lab at Georgetown and creator of DC Affordable Law Firm (DCALF). Professor Krantz has spent much of his career to developing and implementing new models of pro bono aimed at improving access to justice.

Professor Krantz will also speak at the Conference Dinner on “The Rule of Law in the new America,” a topic close we think our readers will find illuminating and entertaining.

One early signature project aimed to improve special education programs within the education system for children with disabilities. The success of this 3-4 year project convinced him that, while short-term pro bono projects can be beneficial, resolving major problems requires more time and resources. He conceived a model of creating partnerships with pro bono clients globally, with a view to long-term access to justice reform.

From this, Professor Krantz developed New Perimeter, a not-for-profit organisation providing long-term pro bono legal assistance in under-served regions to support access to justice, social and economic development, and sound legal institutions.  New Perimeter makes multi-year commitments to its clients, sending lawyers to work alongside partners and clients in-country. As its founding director, Professor Krantz was essential in developing these partnerships. He was also hands-on, overseeing several large-scale pro bono projects in developing and post-conflict countries. As part of his work in Kosovo, for example, he made over 25 trips to the area over five years, helping the local government to create a new legal system and a system of prosecution.

Professor Krantz currently sits on New Perimeter’s board. The program’s continuing success is a testament to the solid foundations laid down in its formative years. He has also served as president of the DLA Piper Foundation, an adjunct program that financially supports New Perimeter and other DLA pro bono programs.

DC Affordable Law Firm
Professor Krantz serves as chairman of the board of DCALF, a non-profit “low-bono” firm founded in 2015 that assists those who do not qualify for legal aid, but cannot afford to pay lawyers’ usual rates.  DCALF assists housing, family law, immigration and small business clients in the D.C. area. There are plans to expand DCALF and to encourage other law schools and organisations to create their own “low bono” law firms.

The Justice Lab
Professor Krantz and his Georgetown colleague Professor Tanina Rostain co-founded the Justice Lab as a means of exploring opportunities for using technology to reduce the access to justice gap. For example, Professor Krantz sees great potential in the development of smartphone apps for legal aid agencies, and to help bridge the access to justice gulf in regions such as rural southern Africa, where there are few lawyers but widespread access to smartphones. Such an app could provide crucial information to citizens about legal self-representation.

The Justice Lab’s current operations involve conducting research and providing technical assistance to bodies such as the D.C. Access to Justice Commission, and developing new approaches to tackling the U.S. access to justice crisis.

As is pointed out in the book’s foreword, dedication, perseverance and targeted strategies will also be required to achieve these goals.

The National Access to Justice and Pro Bono Conference has a broad range of inspiring speakers and NOW is the time to register if you have not already done so.  The South Australian legal community needs your support. 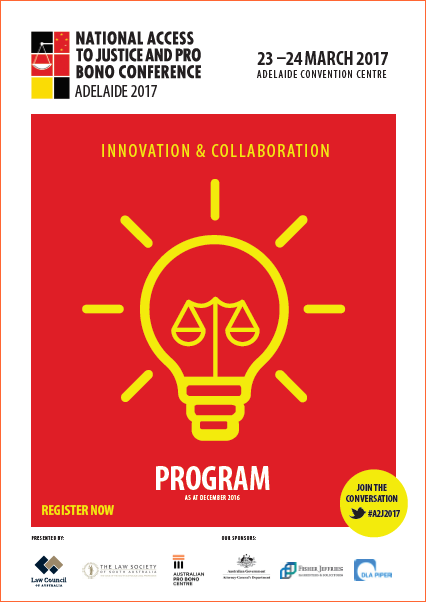 Share this:
Return to CONTENTS
The last of the PILCHs makes LawRight