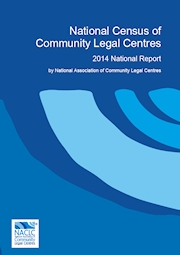 143 out of the 180 invited CLCs responded to the survey and 90.8% of them reported having used the skills and expertise of volunteers during the 2013/14 financial year. However, volunteers come at a cost. With 776,178 hours contributed by volunteers in 2013/14, an average of approximately 1 staff hour was spent in training and orientation to garner 5.6 ‘quality assured volunteer hours’.

The report cautions against drawing conclusions from comparisons with data from the first Census because the total number of respondents is different and profiles are not identical. However, the number of hours contributed to CLCs by pro bono partners in 2013/14 is reported as 72,047 hours (from 76 CLCs) up from 50,859 hours (from 92 CLCs) which would seem to indicate a significant increase having regard to the fact that less CLCs reported partnerships but the total hours increased significantly.
Of the 140 (out of 143) centres that answered the pro bono partnership question, 54.3% (76 CLCs) reported that their CLC had a pro bono partnership.

A ‘pro bono partner’ was defined in the Census as “a professional or firm that, as a business, has formally committed to allocating resources and making a contribution to a CLC and/or its clients, free of charge.”
The top 3 most common types of pro bono assistance in 2013/2014 were (in order):

Part of an infographic produced by the National Association of Community Legal Centres.

The full infographic can be downloaded here.

Are the “right” people getting the right help?
Share this:
Scroll to top