On 17 June 2015 the National Pro Bono Resource Centre officially changed its name to the Australian Pro Bono Centre. The Centre’s new name and visual identity were launched by the Centre’s Chair, Phillip Cornwell, at the Welcome Drinks to the 2015 National Access to Justice and Pro Bono Conference.

The Centre has a proud thirteen year history of working to build the capacity of the Australian legal profession to provide pro bono legal services that are focused on increasing access to justice for socially disadvantaged and/or marginalised persons, and furthering the public interest. The Centre achieves this objective by sharing its expertise on pro bono in many ways – through forums such as this conference; its well-respected reports, practical guides and other publications, such as the Survey and the Australian Pro Bono Manual; innovative projects such as the National Pro Bono Aspirational Target and the National Pro Bono Professional Indemnity Insurance Scheme; and working directly with firms and the community sector.

Importantly, the Centre’s key objectives will remain the same. The change of name is simply about making the Centre’s valuable work more accessible. 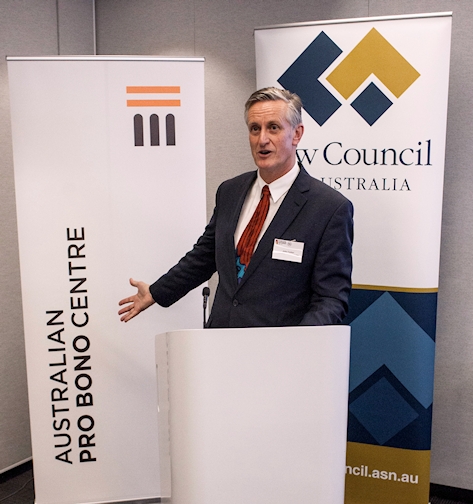 In addition to changing its name the Centre has also adopted an exciting new visual identity to communicate its focus on increased accessibility. The Centre’s new visual identity was very generously developed by Paul Garbett and his team at Garbett Design on a pro bono basis.

Garbett have created an elegant design, incorporating the “pillars of justice” (in black) and “equality” (in orange), both of which underpin the uniting features of the Centre’s diverse work – access to justice and furthering social justice.

We would like to take this opportunity to thank Paul and the Garbett team for their hard work, skill, creative insights and the incredible result they have achieved. We are thrilled with the Centre’s new visual identity and look forward to using it to communicate our purpose for many, many years to come. 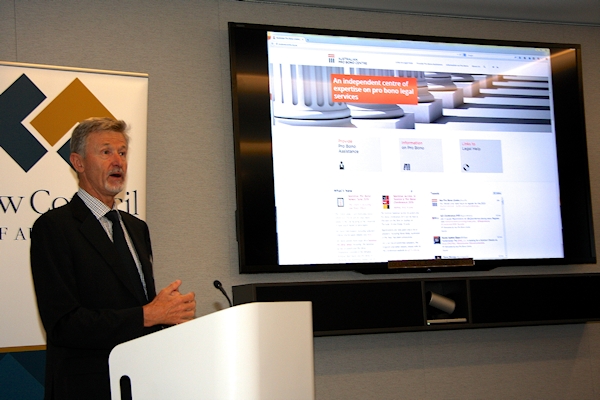 The Centre will also be launching an exciting new website in September 2015, which will be hosted at probonocentre.org.au. Stay tuned!

In the meantime, stay up to date with all the latest pro bono news by following us at our new Twitter handle, @AusPBC.