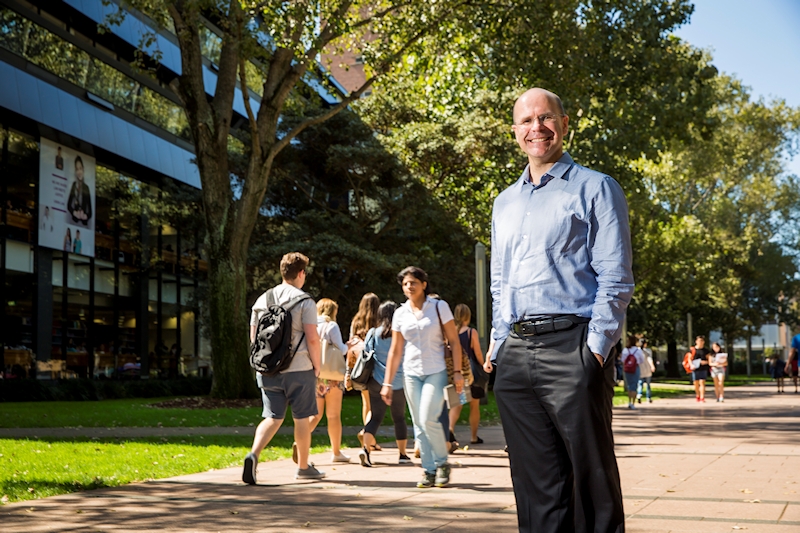 Professor George Williams AO has been the Dean of the UNSW Faculty of Law since June this year.  He is also the Anthony Mason Professor, a Scientia Professor at UNSW Law, and Foundation Director of the Gilbert + Tobin Centre of Public Law.

He has written and edited 34 books including Australian Constitutional Law and Theory and The Oxford Companion to the High Court of Australia, and is well known as a media commentator and writer on issues of Constitutional and administrative law.

But perhaps less known about his career is the large amount of pro bono legal work that he has done since being admitted to the NSW Bar just over twenty years ago.   He has appeared in Supreme Court, Federal Court and High Court matters in Australia and in the Court of Appeal and Supreme Court of Fiji on a pro bono basis.  Also rarely a week goes without him being asked for his opinion on whether a matter has merit, particularly whether it has a chance of being heard and/or being successful in the High Court of Australia.  George also sits on the board of the Grata Fund, a not-for-profit public interest litigation fund set up in 2015 to support high-impact strategic litigation.

George notes that whilst constitutional matters can go direct to the High Court, only 6-8 a year make it. In about 90% of the matters that he is asked about, his advice is not to proceed.  His detailed knowledge of High Court ‘statistics’, the court’s judgements, its day-to-day business, and where the court has seen it appropriate to intervene previously, is particularly useful in advising on whether a particular fact situation has merit.

George has been involved as counsel in many landmark cases on a pro bono basis.  These include cases in the High Court such as Lange v Australian Broadcasting Corporation (1997) (the case that first identified the freedom of political communication in the Constitution); Katinyeri v Commonwealth (1998) (The Hindmarsh Island Bridge case that found the Hindmarsh Island Bridge Act was in contravention of the Racial Discrimination Act and the race power in the Constitution); Plaintiff s157/2002 v Commonwealth (2003)(on appeal from the Refugee Review Tribunal, this is the case that held that the review of certain decisions by the High Court pursuant to s.75(v) of the Constitution could not be ousted by provisions in the Migration Act purporting to do that).

George says that he would like to see a greater working connection between the academy and the profession and that more academics could and should become involved in pro bono legal work.  He says academics come into their own in appellate work; that they are most useful at the edges of the law, in those matters where the law is uncertain, where there are unresolved untested questions.

He notes that the challenge for an academic is to tailor his or her knowledge to the actual matter and to be sensitive to the confines of the way cases have to be run, either for procedural reasons or on the basis of a client’s instructions.  But also notes that when an academic is working as part of an experienced legal team, these challenges are not difficult to overcome.

There is also a challenge for law firm pro bono coordinators to be able to find appropriate academics who are willing to consider becoming involved in pro bono matters.

At the UNSW, and other universities there is often a list of academics who are willing to be contacted by the media for comment on areas that concern their expertise which can be a useful starting point for such investigations.  This is an area that the Centre is looking at to see what it can do in helping universities, particularly law faculties, make available better and more accessible information in this regard.