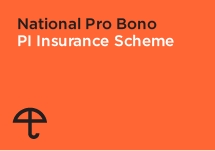 The Scheme, which was launched in 2009 to remove barriers for in-house lawyers wanting to do pro bono legal work, has grown significantly over the past six years. The Scheme has facilitated approximately 1,000 hours of pro bono legal work in each of the last three reporting periods, a significant increase from the 82 hours reported in the Scheme’s first reporting period.

The most recent period saw new applications from a number of lawyers in the South Australian Crown Solicitor’s Office and from ANZ and Westpac’s in-house legal teams.

If you are an in-house lawyer interested in applying for coverage, please see the National Pro Bono PI Insurance Scheme page. For a full list of projects currently covered by the Scheme, please refer to the Register.

If you are interested in reading about the wonderful work being undertaken by lawyers insured under the Scheme, please see the February, April and June editions of the National Pro Bono News.

Share this:
Return to CONTENTS
Expressions of interest – What Works