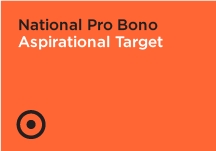 The Eighth Annual Performance Report on the National Pro Bono Aspirational Target, released by the Centre this month, shows that the Target’s influence as a tool to drive pro bono performance continues to grow. The Target now covers over 11,000 Australian legal professionals, including 19 of Australia’s 20 largest firms.

In the 2014/2015 financial year, despite a tightening legal services market, 60% of mid-size Australian firms (201–449 lawyers) boosted their pro bono performance by more than 20%. Large firms also continued to perform strongly, with the nine largest firms collectively reporting over 200,000 hours of pro bono legal work — more than 60% of the 372,602 hours reported. It is a tribute to the dedication of these firms that they have maintained and grown their pro bono programs despite today’s competitive challenges.

Overall, over 45% of signatories met the Target. However, performance across the 77 reporting firms was uneven. Only three out of the ten mid-size reporting firms met or exceeded the Target, and in two mid-size firms, the pro bono hours per lawyer dropped by more than 20%.

The reason for a drop in pro bono performance is often a lack of sustained coordination by a person who is skilled and adequately resourced to undertake the task. The Centre encourages firms that are looking to develop or rebuild their pro bono programs to seek assistance from the Centre, law firms with developed pro bono practices or a pro bono clearing house or referral scheme.

The fact that almost half of the target signatories either met or exceeded it in 2014/2015 demonstrates that the Target remains a credible benchmark for the conduct of pro bono legal work across the profession. It encourages legal professionals to support and develop their pro bono legal culture, practices and programs.

Russell Kennedy’s work to help victims of family violence – a case ...
Share this:
Scroll to top