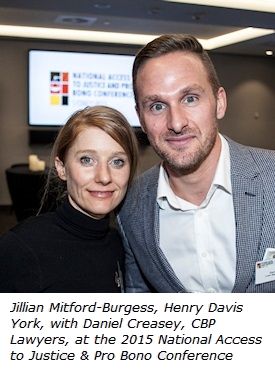 The LRHub was conceived by Pro Bono Senior Associate at Henry Davis York (HDY), Jillian Mitford-Burgess, who saw an acute need that pro bono assistance could help to address, particularly in light of the reduced capacity in not-for-profits and the Community Legal Centre sector for this important advocacy work.

The Productivity Commission’s Inquiry into Access to Justice Arrangements identified law reform activities to be a “necessary means to stretch the value of finite funds to maximise benefits to the community”. However the National Partnership Agreement on Legal Assistance Services, which was concluded with States and Territories and came into effect on 1 July 2015, precludes the use of Federal funds by CLCs for campaigning and lobbying.

The aim of the LRHub is to provide CLCs and other not-for-profit organisations with additional resources to facilitate their law reform and advocacy work. For example in March 2015, HDY assisted Whitelion, a not-for-profit that supports youth at risk, to prepare a submission to the Inquiry into Statutory Limitation Periods in Child Sexual Abuse matters.

HDY supported Whitelion by providing a team of lawyers to research and draft its submission. This allowed Whitelion to keep its limited resources for its important frontline service delivery while still effectively advocating for the needs of its clients.

HDY has assisted community legal centres and not-for-profits with law reform submissions on a diverse range of issues, including:

“As the grass-roots advocates who represent vulnerable people every day, these community organisations are uniquely placed to understand the needs of disadvantaged people and identify systemic issues,” said Ms Mitford-Burgess.

“While HDY is not in a position to advocate on these issues, our lawyers certainly have the skills to support front-line community advocates with drafting, research and submission writing,” said Ms Mitford-Burgess.

In light of the growing need for this type of assistance, HDY has begun coordinating the involvement of other firms, collaborating with them to provide timely and high quality assistance, and is actively encouraging others to join.

HDY has already been joined by CBP Lawyers and Lander & Rogers. The firms are currently working together to provide the National Association of Community Legal Centres (NACLC) with the support it needs to address the Australian Law Reform Commission’s Freedoms Inquiry on behalf of six CLCs.

“This is a great example of the open and collaborative partnerships between law firms, with expertise and leadership from community legal centres. We’re really excited by this enhanced cooperation, and it will become more and more important. Increasingly, community legal centres are relying on their strong partnerships with pro bono practitioners to contribute to research and law reform,” said Amanda Alford, Deputy Director, Policy & Advocacy, NACLC.

The Freedoms Inquiry will review the extent to which traditional rights, freedoms and privileges are encroached upon by Commonwealth legislation. LRHub’s support will help to ensure CLCs voices are heard on these issues.

“Undertaking law reform work in a pro bono partnership is an important part of the mix of projects found in a well-run law firm pro bono program. Not only does law reform work provide a good match for the skills of law firm lawyers, but it also has the potential to address a problem systemically by building on the experiences of community partners and their clients. We encourage other firms to get involved, ” said John Corker, Director of the Australian Pro Bono Centre.