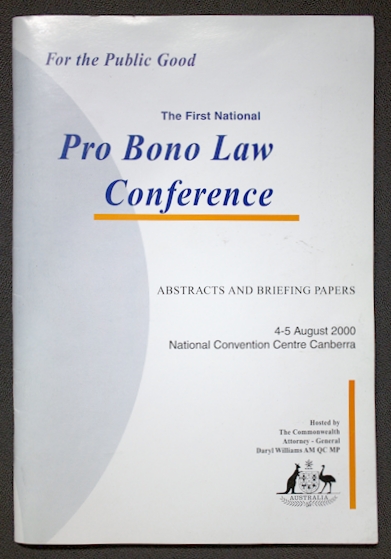 The First National Pro Bono Conference: For the public good was held in Canberra in August 2000. It was the initiative of the Commonwealth Attorney-General, the Hon. Daryl Williams AM QC MP. It was attended by about 500 members of the public, private and community legal sectors, legal educators, judges and judicial officers, government officials, and representatives from professional associations and the business and philanthropic sectors.

Delegates to the Conference acknowledged the pro bono work undertaken by the legal profession and explored ways to better coordinate the delivery of services at national, state and regional levels.

The Conference led to the creation of the National Pro Bono Task Force, appointed by the Attorney-General and chaired by Professor David Weisbrot that produced its report in June 2001 and recommended the establishment of an Australian Pro Bono Centre.

The proceedings of the first Conference were published as ‘For the public good: Pro Bono and the Legal Profession in Australia’, Ed: Christopher Arup, Kathy Laster, The Federation Press, 2001.