Justice for All: Empower – Engage – Sustain

The Centre was delighted to participate in the 8th Asia Pro Bono Conference in Kathmandu, Nepal between 13-15 September 2019. The theme for this year’s conference was Justice for All: Empower – Engage – Sustain. Close to 50 conference sessions over three days emphasised and celebrated the sharing of knowledge and the creation of strong networks among pro bono lawyers in Asia in support of the rule of law and access to justice in the region and beyond. As noted in the introductory session, the conference aimed to “raise the summit of Everest in its achievement”!

The conference was very well-attended, with almost 700 participants attending from over 30 countries. The Centre’s CEO, Gabriela Christian-Hare, attended along with its former CEO, John Corker, who has supported the continuing development of the conference since its inception in 2011.

The focus of this year’s conference continued to be on education and empowerment with a wide range of students attending from Nepal and foreign universities, including QUT in Brisbane.  Lawyers from a number of local and global firms attended, including DLA Piper/New Perimeter, Herbert Smith Freehills and White & Case. As always, the range of participants enabled the sharing of varied experiences and perspectives.

The conference opened with a keynote speech from the Honorable Cholendra Shamsher Junga Bahadur Rana, Chief Justice of the Nepal Supreme Court. Other introductory speeches were also made by representatives of the Nepali legal profession and government, including the President of the Nepal Bar Association and the Minister of Law, Justice and Parliamentarian Affairs.

It was a privilege to hear from Hina Jalani, a member of the esteemed group ‘The Elders’ and Co-Chair or the Taskforce for Justice, who launched the Justice for All Final Report in the first plenary. The report provides alarming new data on the scale of the justice gap, indicating that 5.1 billion people, or two-thirds of the world’s population, lack meaningful access to justice. She stressed that justice is at the heart of sustainable development, that access to justice is inherent in all our rights, and the importance of systemic change to create just and inclusive societies.

This year the conference focused heavily on particular areas of prevalent unmet legal need in the region, including addressing the root causes of statelessness in Asia, pro bono assistance in death penalty matters (facilitated by the Centre’s John Corker), pro bono and ageing populations, pro bono assistance during post disaster periods, transforming the rights of persons with disabilities, pro bono for human trafficking victims, empowerment of prisoners, combating gender based violence, reproductive rights, assistance to refugees and asylum seekers, and business and human rights in Asia.

Interspersed with these sessions were discussions on systemic change, including the role of bar associations in supporting pro bono, strengthening paralegalism in Asia, engaging pro bono support from the judiciary, strengthening pro bono through technology and creating effective frameworks to promote and protect economic, social and cultural rights.

In the preceding and succeeding days of the conference related workshops were held as part of the A2J (Access to Justice) Exchange. This amounted to ten full day workshops (including the three-day Asia Pro Bono Conference), with total participants numbering well over 1200 persons from throughout Asia and the globe, all supporting access to justice and strengthening and expanding pro bono initiatives. The conference organisers, including BABSEACLE, iprobono and numerous others, are to be congratulated for providing an inspirational few days of learning, relationship building and collaboration in support of access to justice.

The conference moves to a different Asian city each year. Next year’s 9th Asia Pro Bono Conference will take place in Manila, the Philippines. 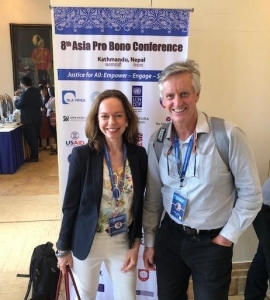