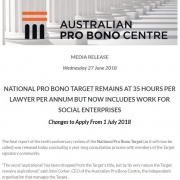 The final report of the tenth anniversary review of the National Pro Bono Target (as it will now be called) was released today concluding a year-long consultation process with members of the Target signatory community.

“The word ‘aspirational’ has been dropped from the Target’s title, but by its very nature the Target remains aspirational,” said John Corker, CEO of the Australian Pro Bono Centre, the independent organisation that manages the Target.

The key outcomes of the Review are that from 1 July 2018:

“The review has been extremely worthwhile. It has facilitated a fruitful discussion within the signatory community about key definitional issues and facilitated the Centre to revisit the strengths and limitations of the Target scheme,” said John Corker.

The changes and new guidance notes will make the Target more fit for purpose to support pro bono growth in the future.

“Despite a number of firms now having internal targets of 50 hours per lawyer per annum, the target of 35 hours remains a realistic benchmark, with around half of Target signatories reporting more, and half fewer, than the 35-hour standard,” Corker said.

The National Pro Bono Target: Final Report (June 2018) and Summary of Changes are available on the Centre’s website.

The Australian Pro Bono Centre is an independent centre of expertise that aims to grow the capacity of the Australian legal profession to provide pro bono legal services that are focused on increasing access to justice for socially disadvantaged and/or marginalised persons and furthering the public interest.

The National Pro Bono Target is a voluntary target that Australian law firms, incorporated legal practices, individual solicitors (including in-house corporate and government lawyers) and barristers are encouraged to adopt by becoming signatories and by signing a Statement of Principles.

Signatories to the Target agree to use their best efforts to provide at least 35 hours of pro bono legal services per lawyer per year, adhere to the Statement of Principles and report annually to the Centre on whether they have met the target in the previous year.

The National Pro Bono Target was established in 2007. With four new law firms signing up in 2018 (at the time of distributing this release), the Target now covers over 12,000 full-time equivalent lawyers. Since its establishment, 2.86 million hours of pro bono work by Australian lawyers has been reported against the Target.

Target signatories are involved in a range of focus areas, including: helping Aboriginal and Torres Strait Islander peoples; people suffering homelessness; severe poverty; those affected by a cognitive impairment, mental illness or other disability; those affected by family violence or elder abuse; those lacking access to education; those in regional, rural and remote communities; and asylum seekers and refugees. Others prioritise women, youth or charities in their pro bono programs.