On 19 February 2019 the Centre released its Report on the Sixth National Law Firm Pro Bono Survey – Australian firms with fifty or more lawyers (Report). The Survey is conducted biennially and forms part of a longitudinal study of pro bono legal work performed by large law firms in Australia. The Report compares the 2018 Survey results with those from previous Surveys conducted by the Centre in 2008, 2010, 2012, 2014 and 2016. The Centre identified 62 firms in Australia with 50 or more lawyers as at 30 June 2018. The Centre wishes to thank all 37 firms which responded to the 2018 Survey. 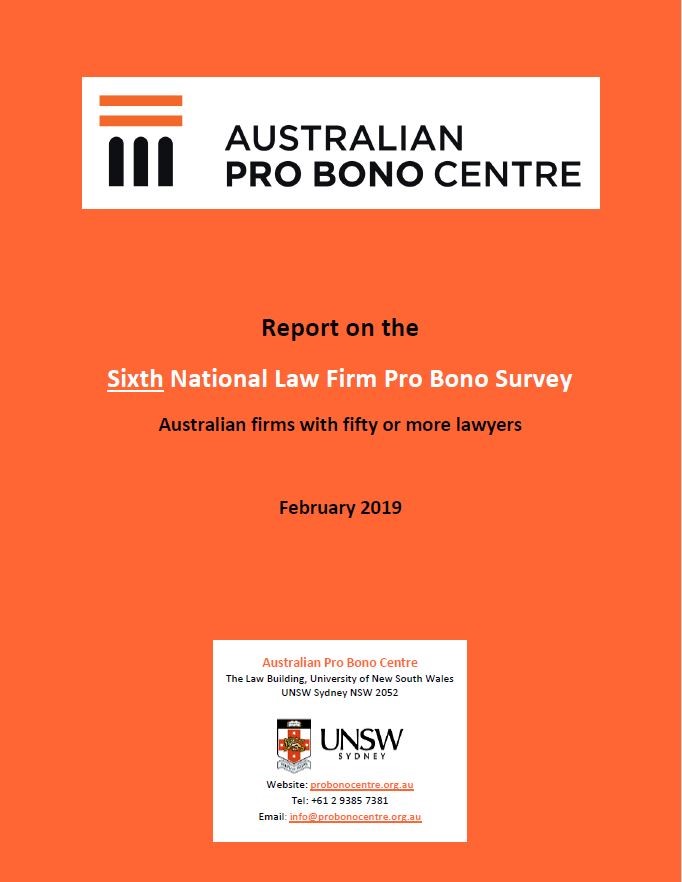 The 2018 Survey results demonstrate a growing dedication to, and maturity in, pro bono legal practice among the largest firms in Australia. The 2018 results indicate a significant overall rise in dedicated pro bono staff, the appointment of more full-time pro bono managers/coordinators, and an increasing number of firms setting operational budgets for pro bono programs and taking measures to evaluate their programs.

Management and partnership support and leadership continues to be the single most crucial factor to the success of a firm’s pro bono program. It is also evident through the 2018 Survey results that pro bono conditions in government tender arrangements continue to have an important influence on the growth of legal pro bono among firms of 50 or more lawyers. Government schemes are introducing firms to the Centre who become new signatories to the National Pro Bono Target.  For example, since the Commonwealth government published a Request for Tender on 8 November 2018 as part of its forthcoming Australian Government Legal Services Panel arrangements, over 25 firms have become new Target signatories.

The top five areas of law in which pro bono assistance was provided by respondents in 2018 were Employment law (20 nominations), Governance (14), Commercial Agreements (13), Corporate Law (including incorporations) (13) and Charity and Deductible Gift Recipient (DGR) Status Applications (13).

Of the 37 Survey firms, 15 firms indicated they had a RAP, 18 did not, and four did not indicate either way. All but one of the RAPs was already in place before the 2018 FY, with one as early as 2007. The large number of RAPs correlates with the focus of work provided to Aboriginal and Torres Strait Islander clients, as indicated above.

Continuing the trend in every Survey since 2008, the most rejected areas of law were criminal law (12 firms) and family law (nine firms), reflecting that most firms in the Survey cohort do not commonly retain lawyers with the unique skillsets required to practice in these areas. In 2018, Immigration Law matters were rejected by fewer firms than in 2016 (six firms, down from 11), but overall there was a decline in firms nominating Immigration Law as a top five area of law practised pro bono (11 firms, down from 16 in 2016).

The Survey data illuminates the growing trend towards commitment to and investment in pro bono legal work. Performance on pro bono matters is now a key component of lawyer appraisals and recognition of pro bono work through internal awards, events and communication is also on the rise, but there is concurrently a concerning declining trend in firms providing full billable hour credit for pro bono work.

Upon release of the Report on 15 February 2019, the Centre’s CEO said: “Whilst pro bono stems from an individual ethical responsibility, it is vital that law firm leaders indicate strongly to their lawyers that the firm genuinely supports them in doing this work. The clearest way to do that is by providing billable credits for their pro bono work.”

The Centre will conduct the next National Law Firm Pro Bono Survey of firms of 50 or more lawyers in 2020.

Share this:
Return to CONTENTS
VIDEO: Eight pieces of advice on how to run a pro bono program